When some water-containing aluminosilicate mineral crystals are burned, because the water in the crystals is driven out, a phenomenon similar to boiling occurs, namely zeolite. In the structure of zeolite (A(x/q) [ (AlO2)x (SiO2)y ] ·n(H2O)), a represents metal ions, and ion A can be replaced by other ions, which will change its performance. The Al-Si (aluminum- silicon) framework in the structure is also an important basis for distinguishing different zeolites. Therefore, the performance of the zeolite can be improved by adjusting the structure of metal ions and Al-Si framework, such as improving the acid resistance and thermal stability of the zeolite. As shown in Figure 1, the common vertices of silicon-oxygen tetrahedron and aluminum-oxygen tetrahedron form various forms of skeletons, such as A-type and Y-type. 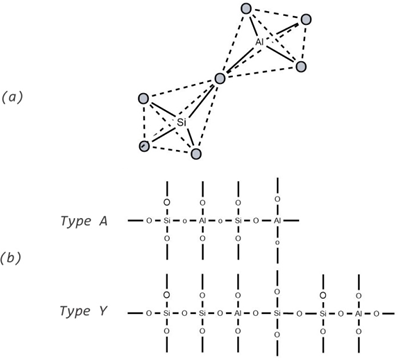 Zeolite has the advantages of uniform pore size and large internal surface area, which has been widely used in catalysis, separation, adsorption and other fields. Zeolite molecular sieve has good adsorption performance, ion exchange performance and catalytic performance.

Zeolite can be simply divided into natural zeolite and artificial zeolite. There are more than 80 kinds of zeolite minerals common in nature, such as mordenite, clinoptilolite, cristobalite and so on.