Phthalocyanine dyes are nitrogenous macrocyclic compounds. Phthalocyanine ring is a big conjugated system containing eighteen π electrons and the electron density is very homogeneous, which makes it hard for four benzene rings in the molecular to distort. Therefore, phthalocyanine dyes have the advantages of good stability, high heat resistance and excellent acid resistance. Moreover, the phthalocyanine ring contains holes with a radius of 0.135nm, which can complex with many metals and transition metal elements such as cobalt, iron, copper, nickel and zinc to form phthalocyanine metal compounds. Most phthalocyanine dyes are synthetic. Porphyrin dyes have a similar structure to phthalocyanine dyes, but porphyrin dyes are a kind of substances widely existing in nature. Porphyrin is a general term of a macrocyclic compound with substituent groups on porphin ring. Porphin ring is a planar conjugated structure formed by twenty carbon atoms and four nitrogen atoms. The two hydrogen atoms and nitrogen atoms of porphyrin molecule could be replaced by metal ion to form corresponding porphyrin metal compounds. Due to the existence of the conjugated π system, the energy level difference between the HOMO and LUMO of porphyrins is reduced, so that porphyrin dyes can absorb and emit visible light, and the quantum yield is high. 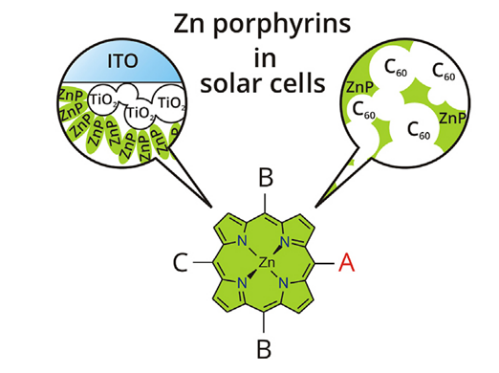