Dipyrromethene dye is a kind of visible region dye, which has many excellent optical properties. Firstly, the dye has strong absorption in the ultraviolet region. Secondly, the fluorescence spectrum wavelength of the dye can be adjusted, up to more than 600nm. Thirdly, the half-peak width in fluorescence spectrum of the dye is narrow. Finally, the fluorescence quantum yield of the dye is high. In the parent structure of dipyrromethene dye molecule, boron nitride heterocyclic ring in the middle and pyrrole ring on the left and right sides constitute a rigid planar conjugated structure, and two fluorine atoms are located on both sides of the plane. The R1-R8 positions in the molecular structure can be modified, and different functional groups can be introduced into different positions to obtain derivatives with different properties. Therefore, by selectively introducing functional groups, the optical properties, chemical properties and physical properties can be adjusted. 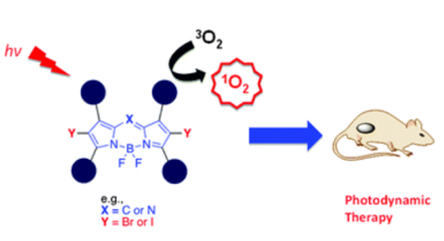 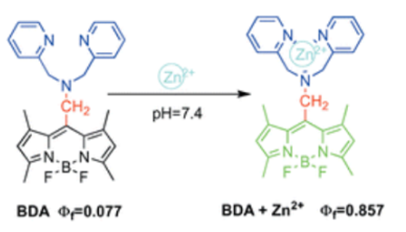